The Black Pear expansion continues with a top senior software engineer coming aboard to work on QuickFHIR and keep our healthcare solutions on track for the NHS. 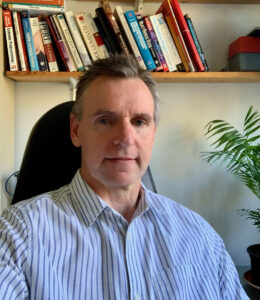 Kevin “KJ” Johnston is well known as a top operator in health tec having worked with most of the team on previous ventures. But not content putting his IT skills to use for clinicians and patients across the country, KJ has ticked off almost every other industry there is.

After starting off in the computer room of his local brewery, KJ went on to work for the government, built the backend in fruit machines and helped the Norwegian postal service with advanced ATM software. Most recently he was at Greggs where he spent 18 years building and integrating their till systems.

But he has moved back into clinical software and is already getting to grips with the technical side of our Care Plans, Care Records and QuickFHIR.

It was a tough one, but it was the right one. The Black Pear products and ethos were so appealing. It is something that is helping people and patients, but also from a selfish perspective the engineering side is really great. They are a fantastic team – I have not heard the word no from anyone.

Through all his roles KJ has championed “agile working” – the idea that small, innovative teams given the freedom to experiment work faster and better than large, centrally managed companies. This was also a key to his move to Black Pear, where part of his role will see him identifying better ways of working.

I love the way of working here. You can test ideas very quickly and everyone is constantly learning. Controlling things centrally works for construction and civil engineering, where it’s mathematical and even, but in software it’s quite malleable. It changes a lot – that’s why it’s called software. Black Pear get that.

KJ will be mostly working on QuickFHIR and although the technology has moved on from his last time in clinical software the mission is the same.

It is a massive learning curve, but I can still relate back as ultimately it’s still patients and their records. Things have really moved on but it’s nice when I look back it’s still David’s vision of making it simpler and easier for clinicians. I think that’s the same now in a different way. These are exciting times.
Previous post Next post

Core end of life is the epaccs clinicians ‘always wanted’